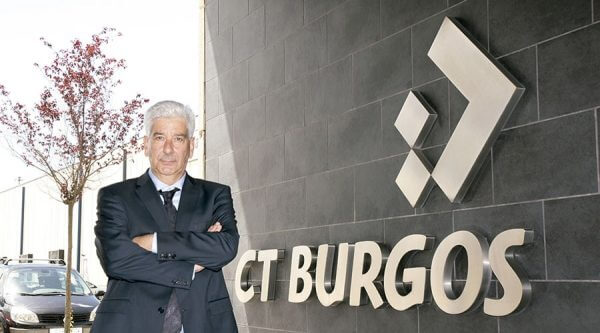 What is the current situation regarding the Burgos TC in terms of activity and occupancy?

In terms of occupancy, we are in a good position. The first years of the financial crisis were difficult, but we have adapted to new market needs and our occupancy rate is 90% for industrial units and between 60-70% for offices.
What volume of freight is handled in the Burgos TC?

In terms of the number of ITUs handled in the Burgos dry port last year, there was an increase of 79% from 4,649 ITUs in 2014 to 8,303 in 2015, chiefly as a result of our link with the Port of Barcelona. As regards the TIR terminal, 139,583 tonnes of freight were dispatched in 2015. This figure was practically identical the previous year. We do not have any data on the movement of general freight within the Transportation Centre as businesses are extremely secretive about their movements.
What are the main origins and destinations of the freight that comes through the Burgos TC?

Most of the freight originates from, or is going to, Burgos and its area of influence, which mainly covers Bilbao, Cantabria, Asturias, Palencia, Valladolid, Logroño and Vitoria.

What is involved in the expansion of the Burgos TC and the adjacent dry port?

We are currently finalising the functional design of the plot with Arup, and all of the indications are that the expansion will provide around 80,000 square metres of space for latest-generation industrial units and an area of 30,000 square metres dedicated to vehicle services and amenities for their crews. The expansion will also provide space for a dedicated railway terminal.

What level of interest has the expansion generated among potential users of the new installations?

We are quite optimistic, but we have to able to offer our clients latest-generation industrial units at a competitive price and with a rail link. There are several high-level businesses in our industry that, for various reasons, have not yet outsourced their logistics. It is our understanding that, when there are industrial units of an adequate standard, this process will be much easier for them.

What chance is there of obtaining funding for the expansion through the Connecting Europe Facility (CEF) programme? I think that that is difficult at the moment, and it will remain that way until the Burgos Transportation Centre becomes part of the global Atlantic Corridor network. We have sent data from the rail terminal in Villafría, which surpasses the 800,000 tonnes specified in Article 27 of EU Regulation 1315, to the Spanish Ministry of Public Works and Transport. The Ministry has sent that data to the European Union and we hope that their decision, if it is positive, will give us a better chance in the next CEF call for proposals.

I believe that it could clearly be improved. We have spoken a lot about intermodality, but the figures for freight transported by rail are still very poor. The government is considering switching some road transportation to rail to ease congestion and reduce pollution, etc., but the direct train between Burgos and Madrid is not yet operational. We are trying to improve the rail system, but then 25.25-metre megatrucks are approved. That really is contradictory.
How can intermodality be promoted and, most importantly, how can companies be made to develop the habit of choosing intermodal transportation options?

In my opinion, ADIF (Administrador de Infraestructuras Ferroviarias – Administrator of Rail Infrastructure) should maintain rail installations and take responsibility for the circulation of trains. In turn, it should hand responsibility for managing rail terminals to private companies. These companies would then provide their clients with good service and switch freight from road to rail because of how important that is to them. The companies should also be informed that the service currently provided by the rail operators has improved significantly and that it really is good.

What role should public institutions play in promoting intermodality? Is what they have been doing until now enough?

Our connections with Europe and North Africa need to be substantially improved by developing the Atlantic-Mediterranean Corridor for rail freight transport. That would enable us to improve in terms of competitiveness and our presence in the European community. Rail access to ports, bottlenecks and rail terminals also need to be significantly improved. I believe that the Connecting Europe Facility programme is going to play a crucial role in the future growth of intermodality on a European level, but that its work should be coupled with investment in rail development in each country.

You can find out more about which cookies we are using or switch them off in settings.

This website uses cookies so that we can provide you with the best user experience possible. Cookie information is stored in your browser and performs functions such as recognising you when you return to our website and helping our team to understand which sections of the website you find most interesting and useful.

Strictly Necessary Cookie should be enabled at all times so that we can save your preferences for cookie settings.

If you disable this cookie, we will not be able to save your preferences. This means that every time you visit this website you will need to enable or disable cookies again.

This website uses Google Analytics to collect anonymous information such as the number of visitors to the site, and the most popular pages.

Please enable Strictly Necessary Cookies first so that we can save your preferences!